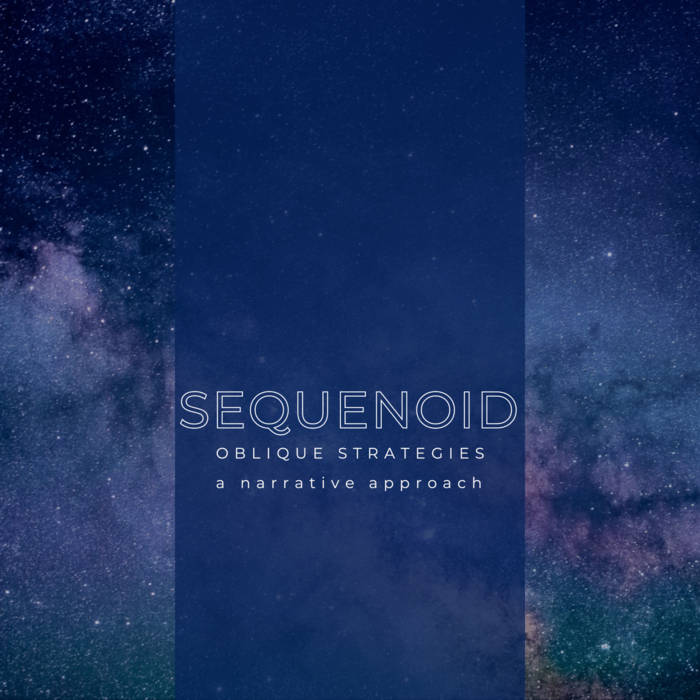 THIS ALBUM is exploring self-generating live single take approach to multitrack recording with no post edits, no sequencer or PC processing.

sound creation is started by using the idea from an oblique strategies concept;

"These cards evolved from our separate observations of the principles underlying what we are doing. Sometimes they were recognised in retrospect (intellect catching up with intuition), sometimes they were identified as they were happening, sometimes they were formulated. They can be used as a pack (a set of possibilities being continuously reviewed in the mind) or by drawing a single card from a shuffled pack when a dilemma occurs in a working situation. In this case the card is trusted even if it appropriateness is quite unclear. They are not final, as new ideas will present themselves, and others will become self-evident."

'go outside. shut the door.' or
'state the problem in words as clearly as possible' or
'you don't have to be ashamed of using your own ideas'

This concept was change from using a 'phrase' to a 'narrative' that can be found in the notes on each track. Using the narrative aided in the conceptualised soundscape created and the results shared online.

Higgs boson doomsday ladder is the connection between the terrestrial sphere and a 5th dimensional reality,
where a quantum fluctuation created by the god particle causes a vacuum "bubble" that expands through space and wipes out the universe.

Millenia have past after the catastrophic event took place and a unidenifiied nano satellite scans the aftermath.

Data recovered by the satlet has determined that a multispecies asteroid-mining firm is investigating the feasibility of injecting bioengineered microbes into space rocks to the processing their valuable resources.

The multispecies Mothership would be carrying a number of tiny CubeSats, one of which would deploy and spiral down to the asteroid's surface.

The CubeSat would then inject into the asteroid a low-temperature fluid laden with bacteria, which would propagate through cracks and fissures generated by the injection process. Over time, the microbes — genetically engineered to process metals efficiently — would break down harmful compounds within the asteroid and/or transform resources into different chemical states that are more amenable to extraction.